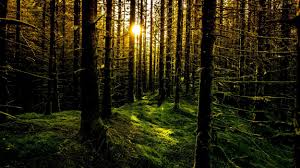 My train journey began at 330pm, and was planned to end at 10.20pm, a pretty unsociable time to arrive into a new city, but nonetheless, this is how it happened. Within minutes of leaving Oslo the scenery proved to be magical.

Dark green forest, lakes galore and colourful pops of wild flowers along the side of the track, were all consistent views on this trip. I was in heaven! I was also pretty tired after already travelling for over 24 hours, but I was determined to stay awake and enjoy the pristine scenery.

This train ride from Oslo to Bergen is known for being one of the best in the world, and I could see why. I only read short snippets of my book, and continued to keep my eyes peeled on the magnificent changing landscape.
The only hiccup we had, 3 hours into the journey the train came to a grinding halt. A tree had fallen onto the track and cut the electrical power, we were stuck! Passengers were all a bit bewildered and moved around the train more, cluttering up the cafe area. I was just having a sticky beak and open to some random conversation. Luckily I achieved a whole lot more!

Randomly I was drawn to this particular lady, and we engaged in some minor chit chat. Pretty soon I worked out that she was very spiritual and ran meditation retreats around the country, she also told me she could talk to spirits. Always pleased to meet a fellow medium, I asked her if she could sense anyone around me. Quite quickly she told me I had a tall man right next to me, with warm sparkly eyes. I knew exactly who this was!

All morning I could feel my Dad with me. Travelling to Europe always makes me think of my Dad and his Latvian heritage. Seeing all the white barked grand birch trees, is another strong reminder of my Dad, silver birch was his favourite tree, and they are all over Latvia too! Hearing this lady tell me she could see a man next to me, only confirmed my strong feeling that my Dad was coming along for the ride!

She also told me I had a giant spirit animal standing with me too, a big black bear. To her this meant I was strong, but I needed also to rest and hibernate, just like a bear does. I could really relate to this idea, and know hibernation periods are so important in my life. I had never been told I had this spirit animal with me, so it was pretty cool information to receive.

Finally the train was in action, and moving once again at a swift pace through epic scenery. For me the train malfunction had been something positive, and I wondered if somehow my Dad had sneakily engineered the whole encounter? When spirit want to communicate with you they will find a way, and sometimes in the strangest of circumstances.

I kept my eyes glued to the outside for the remaining of the journey, admiring the many bodies of water, abundant dark green forest and beautiful wild native flowers popping up and blowing in the wind along the track. Slowly the terrain changed, snow capped mountains appeared, wild coastal choppy waves, side ways rain, and massive epic mountains.

Due to the train malfunction, we arrived late into Bergen. I was pretty tired after travelling for well over 30 hours at that point. I lumbered down the stairs of the train close to midnight, with some light still in the sky, I spotted my friend Unni and her children, waving the Norwegian flag eagerly awaiting my arrival. Yay! My journey was complete, I had finally arrived to the west coast of Norway where I planned to spend a week enjoying the scenery and the company of my lovely friend who I had met a few years ago in the Greek islands. Let the adventure begin!

Just to let you know, on this trip I am planning to spend a week in Norway, a week in Belgium, a week in Croatia and a week in Italy. We have all this to look forward to!

6 thoughts on “Part 2: Train ride from Oslo to Bergen.”